The Low Line to the Colorado Desert 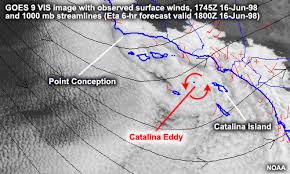 Signals were odd tonight with no SD and only week SB in its home away from home – though I was not at the best of spots to listen.

Anyway, why is it so often that a small ridge of low pressure slices across central southern California even as the rest of the southern and western region of Cal. is privy to rising pressures?  Such a condition is again predicted for later today (per KABC, eleven o’clock news Wednesday night Dec. 3, 2014).  Is the “Catalina eddy” a factor (or maybe an anti-Catalina eddy)?  Of course, a massive low pressure system (that dropped the most rain in a year – 2 inches approx. over last 2 days) is moving further east into the continent.  Concurrently, of course, a higher pressure system is arriving from out at sea and is bound for the SoCal area.  Nevertheless, the KABC weather person on Wednesday night was clear to call out the comparatively-small line of low pressure that would remain across central SoCal (and the low ridge seemed to appear intact almost all the way to the due east and deep into the desert).  This low pressure line/ridge seems often to appear in about this same place – though not always reported on all the weather maps; I’ve come to notice of late.
AVT

See also (but I don’t know where the one who is asking surfs, Newport Beach, I assume):
What causes the dreaded "catalina eddy" that routinely plagues us with early morning south winds, especially in the spring/early summer? Seems like it's been happening a lot recently.  And why do those days tend to glass off in the afternoons?
http://www.surfline.com/community/whoknows/whoknows.cfm?id=1018

And:
Cruise to Catalina, California!
http://theultimateroadtripamericac2c.blogspot.com/2013/04/cruise-to-catalina-california.html
Posted by Adam Trotter at 2:05 AM